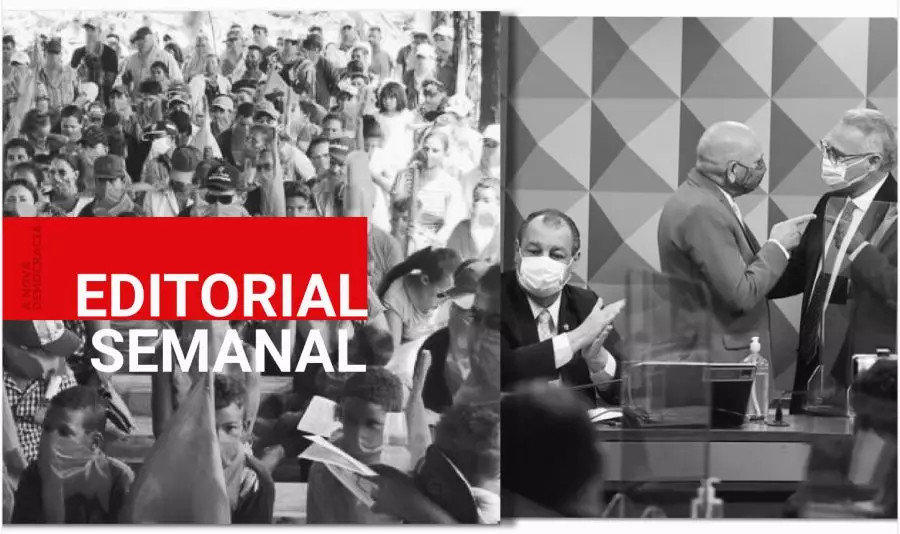 This week, the press monopolies turn their attention to the reading of the Covid Parliamentary Commission of Inquiry (CPI) report, which promises to be “devastating” for Bolsonaro. The months of repeated denunciations, although they have revealed scabrous details of the routine of government in Brasilia – including the spurious role played by high-ranking officers of the Armed Forces – were not enough to advance the impeachment and, given the position of the Attorney General’s Office, are unlikely to result in the criminal liability of Mr. Capitão do Mato & Co. In fact, his support base remains loyal, and has moved very little since the beginning of the statements.

In short, as a practical measure, the CPI was an enormous stage, which served to wash the biography of hideous figures like Renan Calheiros and raise to the status of sub-celebrity – at least among the extreme right-wing electorate – the priceless Marcos Rogério, the Pathetic, senator for Rondônia and finished expression of the latifundium that dominates this state. A month from now, no one will remember the existence of this commission.

This clearly reveals what this newspaper has always reiterated: we have nothing to expect from the instances of governance of this bureaucratic-landowning, imperialist-servant, eroded, rotten and reactionary state to the core. The disputes that take place inside the state, between factions of the dominant classes, in which those in opposition accuse those in government of the same crimes that the latter accused them of when the situation was reversed, do not concern the interests of millions of poor people in the city and countryside. In the face of the coming uprising of the masses, those who are fighting today will form a single counterrevolutionary bloc, although full of contradictions and through collusion and pugnacity, to defend the sacrosanct “democracy” of money and the surname, the bastard daughter of capitalism with semi-feudality. One of the most grotesque images of this 2021 was to see “Their Excellencies,” who spoke roughly with some small fish, lower their heads and tone of voice before the parrot Luciano Hang, perhaps persuaded by his convincing bank account, which next year should pay for several candidacies among his interrogators.

This is the consequence of the gentlemen “bourgeois democrats”. Prevent Senior, which, it seems, has done clinical trials on humans, without any supervision, keeps its doors open. Pazuello, the butcher, goes unpunished for the atrocities in Manaus. It is very rare that the bourgeois courts reach the genocidaires of their own class, something only possible when the masses themselves threaten to catch them for themselves. In general, justice only comes in the severe form of the revolutionary courts.

Meanwhile, out of the entrenched fights between the fractions of the ruling classes came new and empirically verifiable revelations of the nefarious role of the Armed Forces High Command as the Moderator Power of this lordly republic. A former intern of Lewandowski, of the Supreme Federal Court (STF), revealed in Internet conversations that General Villas Bôas, when he was Army Commander, had “free transit with all the Justices” of the Supreme Court and also enjoyed the privilege of being attended to whenever and however he wished by all of them. What’s more, the Court repeatedly changed its decisions (but no much), suddenly, after calls or visits from this general, the “silent protagonist”. How independent are the powers that be!, hooked as they are on bayonets and subject as canines to the dictates of reactionary military power, the marrow of the de facto power of the big bourgeois and landowners, servants of imperialism, especially Yankee imperialism.

Having said all this, this week, from the point of view of the proletariat and the masses of the people, the hill of the people, attention turns to an event of incalculably greater importance: the unfolding of the illegal repossession order against the Tiago dos Santos and Ademar Ferreira Areas, in Rondonia, and the firm heroic resistance that those thousands of honorable peasants are putting up, a resistance that promises to grow stronger. In this struggle, the two paths that have continued, like veins, throughout the entire history of the country clash: the bureaucratic path of reaction and the democratic path of the people. All democrats and revolutionaries must take a clear stand and show firm class solidarity in the face of the intrepid resistance that lies ahead. To remain silent is to be accomplice of the massacre that the Military Police, the National Security Force sent by the military government of Bolsonaro and the gunmen – led by Governor Marcos Rocha – are plotting against the settlers. This is about more than the just struggle for land. What is being resolved here are the destinies of Brazil.