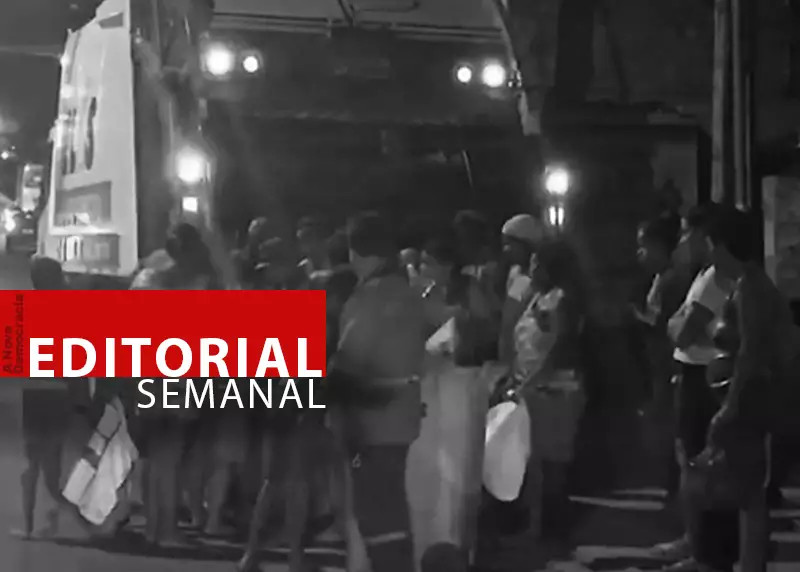 The proposal by Bolsonaro and the Planalto generals, who intend to raise the value of the so-called “Brazil Allowance” to R$ 400 by the end of 2022, served to demonstrate what we have always pointed out: in the dispute between the “occasional humanists” – whose spokespersons are the editorialists of the press monopolies, backed by the opportunists – and the blatantly coup-mongering far right, there is not a trace of genuine popular interest involved. This is a dispute in the camp of reaction, about which is the most effective way to keep the masses of the people out of the political process.

It is clear that Bolsonaro’s maneuver, which does away with the infamous spending cap approved under Michel Temer, has an obvious electoral nature. In any case, what’s new in a democracy as oligarchic as this one we have, in which, in the end, it is more than established that anything goes to grab a piece of state power, without which the centuries-old parochial interests of the “political bosses” cannot prosper? These “social programs” have always been just that: a tiny crumb of the budget thrown to the poor, to keep them under police and electoral control, when in reality the big sum of money, generated by the working masses themselves, goes to the magnates who control the state apparatus. In short, these are programs to keep the masses from fighting and to make them vote – with their stomachs. Let’s remember, for example, Lula’s reelection and, above all, Dilma’s two elections, when the beneficiaries were blackmailed into voting for their “godfathers”, otherwise the program would be cut off. These are the terms of this electoral machine that has always been oiled in Brazil by the misery and enchainment of huge portions of its population.

The proof that such programs do not affect, in the least, the social-economic structures that generate inequities is, first of all, their perpetuation over time and, secondly, the fact that they have been applied continuously by Fernando Henrique Cardoso, Lula, Dilma, Michel Temer and Bolsonaro, that is, by representatives of almost the entire official political spectrum. In fact, the only substantial difference lies in the fact that the far-right captain has paid more than any of his opponents: the amount disbursed by the Union alone as “emergency aid” in 2020 – approved by Congress, it is true – was equivalent to ten years of Bolsa Família. The great “clash” proposed, so far, by Luiz Inácio, is to oppose to the government’s R$ 400 (which is equivalent to 36% of the hunger minimum wage of R$ 1,100), the demand for R$ 600 (which would be equivalent to 54% only of the same hunger minimum).

Yes, the situation of the masses in Brazil in 2021 is such that the chances of a candidate being reelected are substantially increased by the fact that he promises to pay workers in poverty a third of the current minimum wage.

But even these crumbs sound unacceptable to the starched “economic analysts”, salaried lackeys of financial capital, who hire them not to reach scientific conclusions, but to wrap in confused verbiage the paradigms of savage capitalism that they preach as if defending a religion. The so-called “fiscal responsibility” should be above, for example, the need that millions of Brazilians have to feed themselves; just as the “floating price policy” should determine that fuel should follow the dollar exchange rate, even if at the cost of pushing parts of our population to use firewood for cooking or thousands of truck drivers to the horrifying condition of paying to work. Those same chicago-boys – who supported, by the way, en masse, the rise of Bolsonaro – repeated for years on end that the union, labor and social security “reforms” would be able to boost, as never before, the rotten economy of bureaucratic capitalism, and now what do we see? The country came out of this “neoliberal” shock in a violent leap backwards. It’s curious to register that one of the national economic popes, even considered “progressive” by sectors of the opportunist left, Delfim Neto, the longest serving Finance Minister under the military regime and one of the signatories of  Institutional Act No. 5 (AI-5), declared in a recent interview that he would sign the infamous arbitrary rule again. Nothing more symptomatic of how these people think: the role of so-called “orthodox” economists is just to do the math, regardless of whether the balances they claim can only be obtained by the “heterodox” methods practiced in the basements.

In any case, the causes of hunger and of the economic debacle persist; they are structural and insurmountable in the framework of the current economic-political order of domination. The monoculture-exporting latifundium, the Brazilian bureaucratic monopolies and the foreign imperialists installed in the country, claiming benefits and fiscal exemptions of all kinds, the rapacity of imperialism, that drains not only a good part of the capital accumulated here, but also the natural and mineral wealth of our soil and subsoil – in an almost typically colonial model -, these are the factors of our many economic, political and ideological miseries. Bringing them to an end will be the task of the new generations. The beginning of their end is the firm awareness on the part of the oppressed that it is necessary to break, in a radical and consequent manner, with negotiated solutions and with the periodic trafficking in illusions.