In our post: PERU: The contradiction between the factions and groups of the big bourgeoisie is sharpening.  What is the good for the people of all this crisis in the reactionary hill?, we wrote the following about the new reactionary government headed by opportunism:

“Signed by the failure of the reactionary elections of 2021 in their objective of a replacement of reactionary authorities of the old state “legitimized” in the ballot boxes; the logical result was a weak government of the caudillo of occasion Pedro Castillo Terrones, the opportunist strike-selling rondero, invested without that “majority” backing of the ballot boxes that all the opportunists and revisionists adore so much. Without his own party and without a parliamentary majority as government and, even more, he as president without his own bench, more than a few parliamentarians dragged from the Movadef, elected on the PL lists.

Thus, everything shows that the Peruvian State has become weaker in its bases and will have to rely more and more on its armed and repressive forces; and it will become clearer to the people that the armed forces are the backbone of the State and that this State is nothing more than organized violence for the maintenance of the slavery of the Peruvian people”.

This weak reactionary government headed by the opportunist counterrevolutionary Castillo Terrones is on the ropes, beset by questionings both from the groups of the other reactionary faction (the comprador faction of the big bourgeoisie) and from the very faction whose representation he assumed (the bureaucratic) and even more from the very party with which he ran in the reactionary elections of 2021, Peru Libre, that on its own reactionary side, and, on the other side, by the growing popular protests, such as those that every day that passes show themselves to be broader and more combative and that threaten to cover the whole country.

Hence, this weak government, as the head of the fascist, genocidal and fatherland-selling regime initiated with the so-called “Fujimori self-coup” in April 1992, has to rely on the Armed Forces and repressive forces and has resorted to handing over control of internal order to the genocidal Armed Forces, first as a threat and as a test to extend it to the whole country. A reactionary source on the matter reports as follows:

“By means of a supreme resolution in which it is argued that organized crime has “surpassed the capacity of the Police” in Lima and Callao, the Government authorized the Armed Forces (FF.AA.) to intervene in citizen security tasks.” 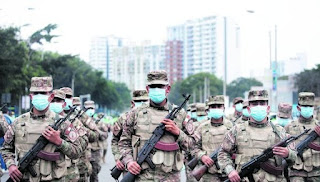 “The objective -refers Supreme Resolution 191-2021-IN, promulgated yesterday in the newspaper El Peruano- “is to ensure the control and maintenance of internal order”, as well as “to provide support in the execution of police operations to the Police Regions of Lima and Callao” for 30 calendar days”.

“The action of the Armed Forces constitutes a task of support to the mission of the Peruvian National Police and does not relieve the active participation of the latter,” adds the provision signed by President Pedro Castillo and the heads of Defense, Walter Ayala, and Interior, Luis Barranzuela.”

This is a more serious expression of the current political crisis as part of the collapse of the old State and of the old semi-colonial, semi-feudal Peruvian society where bureaucratic capitalism is developing, which is being swept away by the people’s war since 1980, even though this is going through difficulties and difficult and complex situations, this will not be able to end except with the victory of the Peruvian revolution. A condition is the General Reorganization of the PCP, firmly subjecting itself to the leadership of Chairman Gonzalo and Gonzalo’s thought.

The growing protests and struggles of the masses show that they have not allowed themselves to be united by the opportunists to the corporatism promoted by this government to crush the struggle of the masses, but on the contrary, with their struggle they show the true nature of the reactionary government of Castillo and his accomplices the rats of the revisionist and capitulationist right opportunist line (ROL-Modavef), headed by the rat “Miriam”, The reactionary newspapers report thus::

“The protests and road blockade against companies in the mining and agro-industrial sector have been escalating in recent weeks to the point of registering acts of violence such as the invasion and burning of facilities”. 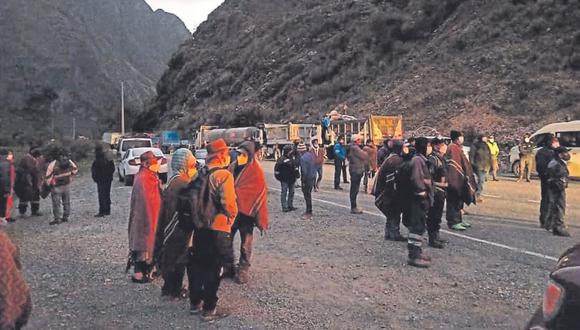 This photo corresponds to the community of Aquia in the highlands of Ancash, but it could well correspond these days to many other places, where the masses are mobilized and developing violent protests against the great dispossession of the majority of the people, mainly the peasantry, by the big companies of imperialism and bureaucratic capitalism at its service.

“The big issue is that we are seeing that a company (Antamina) in spite of having all the authorizations, sees its project at risk if it is attacked by a social organization promoted by anti-mining agents or other interests,” it stated.

Another alarmed commentary from reactionary journalism says: On the paralyzation of operations of the Antamina mining company, the president of the Central Reserve Bank (BCR), Julio Velarde, also stated that the acts of violence affect the way in which Peru is viewed for future investments.

“It is affecting the perception of the country in terms of future investments. In no case is violence justified. Obviously it is not the best news for mining companies,” he said in statements to the press after being sworn in as head of the BCR for 5 more years.

He added that it is too early to analyze the consequences that these acts could bring to the country.

Then follow more reports from the reactionary point of view against the struggle of the masses against the huge plunder of big imperialist mining and its agents of the native big bourgeoisie:

The acts of violence against different companies have massified in the last weeks (See infographic).

For example, on October 29, a group of unknown persons set fire to a tanker truck in the midst of the protests that the community of Aquia in Ancash was carrying out against the Antamina mining company.

In addition, the Breapampa mine was also affected by the protest, as offices and dormitories in the facilities were damaged by rocks thrown by the demonstrators.

It should be noted that this measure was lifted yesterday after a commission from the Executive Branch traveled to agree on a truce.

On Friday 29, protesters invaded and set fire to the facilities of the Apumayo gold mining company.

Around 500 people entered Apumayo and caused destruction and looting. Among the assets burned were administrative offices, vehicles, the tap, the canteen and the processing plant. In addition, electricity was cut and goods were stolen, including explosives.

Meanwhile, the Buenaventura company filed a request on the same day for the temporary suspension of its mining and processing activities at the Uchucchacua mine, due to the fact that the local community went on strike.

Last Sunday there was also a fire on the land of the Caña Brava company in the La Huaca district of Paita (Piura). The event is under investigation but it lasted several hours and affected the population”. (DIARIO CORREO EDITORIAL, Updated on 03/11/2021)