Chairman Gonzalo is immortal in the flames of revolution!

On September 11, 2021, the leader of the Peruvian revolution and the World Proletarian Revolution, our Chairman Gonzalo, passed away. The world proletariat was just remembering the death of the Great Leader Chairman Mao only a few days early, and now we have received such bad news. The reactionary Peruvian government has plotted for his assassination for 29 years since 1992, during which he endured inhuman torture in the Callao Navy Base prison made exactly for him and was kept in a cell isolated from the whole world: the reactionary government carried out the planned assassination with this kind of cruel environment. In July, reports emerged pointing out Gonzalo’s health has deteriorated and was transferred to a military hospital. Communists launched the movement in defense of the life of Chairman Gonzalo, the movement is undoubtably a successful one and the reactionaries were intimidated. The bourgeoisie has always been keen on deceiving themselves, these rotten garbage don’t accept the fact that they will be swept away and dreamed of keep on ruling forever and liquidate all forces of resistance. What exactly did their vilest “low-intensity warfare” against the People’s War destroy? This kind of warfare is carried out to protect them forever; the bourgeoisie clumsily imitates and studies the theory of People’s War, trying to find a breakthrough point to save itself from certain death, but the crumbling of the bourgeoisie is due to its internal contradictions. For the bourgeoisie to kill People’s War, it must kill itself first, therefore all actions in the attempt to save itself become suicidal actions: the people strengthen themselves and become invincible in this kind of inhuman warfare, and finally will crush the plot of the reactionaries.

The reactionary media acted in concert with this assassination, vilely defaming this great figure, while the buffoon of the reactionary government Castillo played the leading role of this farce, smearing him as a “terrorist”, accusing his People’s War of causing the death of thousands of compatriots, deceiving the people by continuing the anti-Communist propaganda through the lies of democracy and peace, while completely forgetting about the sufferings of the people caused by his reactionary government and the inhuman semi-colonial semi-feudal rule of the bourgeoisie, how much more than thousands of compatriots have perished! And the opportunists and revisionists are echoing these self-deceiving cheers, playing down, calling against and even refuting Chairman Gonzalo as the leader of the international proletariat. The more they continue this defamation, the more President Gonzalo is proven to be extremely correct; when the enemies are attacking us, it means that we are doing the right thing.

Chairman Gonzalo was born in Arequipa on December 3rd, 1934, he experienced the popular protests in Peru when he was still a college student, and actively took part in the strike movement, in where he saw and understood the class struggle between the people and the reactionaries, while the polemics between the Communists and the reactionaries at the time made him put even more focus on studying Marxist theory. After graduation he was in charge of the work of the Ayacucho Regional Committee and during this time continued to deepen his understanding of Marxist theory. During the Great Proletarian Cultural Revolution, Chairman Gonzalo came to China and saw this unprecedented ideological battle with his own eyes, which greatly strengthened his determination to wage resolute struggle against revisionism and his understanding of the revolution. Based on Mariategui’s analysis on the semi-colonial semi-feudal society of Peru and his concrete investigation of the Peruvian society, he dedicated himself to the struggle to reconstitute the revolutionary and proletarian Communist Party of Peru, expelled the right opportunist elements within the Party and reconstituted the Communist Party of Peru, led the Peruvian people in waging the great People’s War in Peru, reigniting the lighthouse of revolution. When he was detained in 1992, the People’s War in Peru has controlled two-thirds of the whole country, close to victory. And this war is still being fought after his detention raising the flag of Chairman Gonzalo in Peru.

Chairman Gonzalo defended and synthesized the qualitative all-round and universal contributions of Chairman Mao, synthesizing it as Marxism-Leninism-Maoism, the third stage of Marxism and the most powerful weapon of the proletariat and the oppressed peoples, a weapon that was tested in People’s Wars in both Peru and the whole world and proved as the only correct path and closely related to Gonzalo Thought, and how to understand and treat the relationship between this ideology and Gonzalo though is the touchstone to test every self-proclaimed Marxist-Leninist-Maoist.

“Though death befalls all men alike, it may be weightier than Mount Tai or lighter than a feather.” Chairman Gonzalo gave his life for the People’s War. He has never stopped opposing capitalism. His death is the huge loss of the international proletariat, all Communists of the world are mourning for him. Chairman Gonzalo taught us to not be easily knocked down. 29 years ago the Peruvian reactionary government humiliated Chairman Gonzalo by putting him in a cage, but Chairman Gonzalo fired back at their humiliation with a revolutionary declaration:

“We are here in these circumstances. Some think this is a great defeat. They are dreaming! We tell them to keep on dreaming. It is simply a bend, nothing more, a bend in the road. The road is long and we shall arrive. We shall triumph! You shall see it!”

Revolutionaries must keep his teachings in their hearts, wipe off their tears and continue the struggle, learn and grasp Maoism, devote themselves to revolutionary practice, these are the best way to mourn Chairman Gonzalo. Revolutionaries in China must work even harder to carry out the urgent task of reconstituting the Maoist and militarized Communist Party – a task that has been pending since October 1976 – to initiate People’s War and take pack proletarian state power. Finally, we call to boycott the ongoing electoral farce of the county- and township-level People’s Congress that dresses up the Chinese fascist rule and to expose the fascist nature of Chinese social-imperialism.

Chairman Gonzalo is immortal in the revolution!

Long live Marxism-Leninism-Maoism! Down with revisionism! Sweep away all parasites! 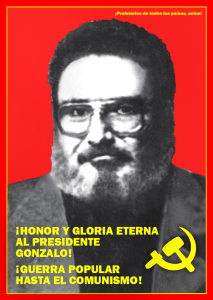