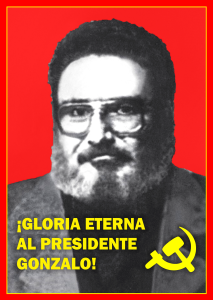 Statements and greetings of Honor and Glory to Chairman Gonzalo

During the morning of Saturday, September 11, the National Penitentiary Institute of Peru (INPE) and the reactionary press reported that the old Peruvian State has finally consummated its attempts to assassinate Chairman Gonzalo, after 29 years of imprisonment in absolute isolation, in a underground prison built under the Navy base in el Callao.

Maoist organizations and parties around the world had recently reiterated a call to carry out a campaign for the defense of the health and life of Dr. Abimael Guzman Reynoso, whose party name is Chairman Gonzalo, after receiving news that in July he had been transferred to a hospital near the Maximum Security Prison of the Callao Naval Base (Cerec), in the metropolitan region of Lima. On that occasion the Peruvian reactionary press affirmed that it was a metastasis process derived from a skin cancer for which he never received adequate medical treatment.

In a statement issued last August 28, the People’s Movement Peru and Maoist parties and organizations of America and Europe reiterated that the conditions of absolute isolation and lack of medical attention to which Chairman Gonzalo was subjected corresponded to a plan of annihilation. They point out that this plan was drawn up by the US CIA, together with the Peruvian reaction and with the complicity of the Right Opportunist Line ( ROL), headed by Elena Iparraguirre (Miriam). The statement points out that this plan “concretely, aims with the service of the rats of the revisionist and capitulationist ROL to annihilate the great leadership of Chairman Gonzalo in order to annihilate the Party, the heroic fighter who leads the revolution and, therefore, to try to prevent the general reorganisation of the Party.”

Chairman Gonzalo and his unfading thought

It was under the leadership of Chairman Gonzalo that the Communist Party of Peru was reconstituted, during the 1970s, and the People’s War was initiated and developed from 1980. The enormous ideological and political influence that Chairman Gonzalo and the Communist Party of Peru (PCP) achieved among the Peruvian people and in the world revolution made his capture a priority task for the Peruvian government and the CIA of the US. His capture on September of 1992, during the government of the genocidal Alberto Fujimori, was presented as the “capture of the century”. But to stop the new democratic revolution in Peru it was not enough to capture its leadership; it would be necessary to aim at destroying his prestige as a communist leader and to make him renounce his ideology: Maoism and Gonzalo thought. However, “the reactionary plan applied for nearly 29 years always crashed against the unbending, fierce resistance of the great proletarian leadership, the great communist, who, having become a prisoner of war of the old Peruvian state, transformed the concentration camp of the Callao Naval Base into the highest luminous trench of combat.” the People’s Movement Peru points out in a statement issued today.

Marxist-Leninist-Maoist parties and organizations in various parts of the world today recognize his immortal contributions to the world revolution, studying and promoting the need to uphold, defend and apply his universally valid contributions to Marxism-Leninism-Maoism. Likewise, they have condemned the hoaxes raised by the CIA in complicity with the ROL to try to present him as a renegade and capitulator of the path of the people’s war, for which it was necessary for them to maintain the regime of absolute isolation in order to put third parties to speak on his behalf.

In this vain endeavor, since 1993, supposed “peace letters” were presented by the intelligence, under the direction of the CIA and the corrupt Vladimiro Montesinos. In 2000, following this “peaceful solution” plan that sought to prevent the reorganization of the PCP and the continuation of the People’s War in Peru, the ROL declared that it was no longer necessary to defend the life of Chairman Gonzalo, and vainly sought to deactivate the international campaign for the defense of his health and life that was raised immediately after his capture in 1992, and which reached dozens of countries. Later, an apocryphal book “De puño y letra” was published, with a prologue by Elena Iparraguirre, in which she wrote that “Chairman Gonzalo was already gone”, thus disavowing his great leadership for the party and the revolution. All this information supposedly linking Chairman Gonzalo with the “peace letters” and with the Movadef group came to light by indirect means, through Peruvian intelligence, his lawyers and through former members of the central committee of the PCP. The only verifiable thing, really, is that no evidence of Chairman Gonzalo’s supposed “repentance” regarding the path of the revolution, Maoism and the People’s War was ever presented; on the contrary, in the only opportunities he could express himself, he did so to reaffirm himself in the ideology, in the Party and in the revolution.

Now that the sinister plan to physically assassinate Chairman Gonzalo has been consummated, they will try to redouble their vain efforts to annihilate his thoughts. We have already been warned of the need to be prepared for the presentation of some other tome as “his last will”, just as at the time the sadly famous “Testament of Lenin” was presented, which he never dictated because at that time his advanced illness prevented him from expressing himself.

The reactionaries, opportunists and revisionists who today rejoice in his death, will immediately do whatever they can, and will resort to whomever they can, to try unsuccessfully to annihilate his thought. But Gonzalo’s thought, being the highest application of proletarian ideology, makes communists emerge wherever these seeds fall, overcoming borders and adversities of all kinds.

After hearing the news that Chairman Gonzalo has given his life in the luminous trench of combat, in Chile slogans of Honor and Glory and salutes were raised in his name, in the midst of the popular protests with which the people commemorate their fallen after September 11, 1973.

At the international level, the MPP has published a statement in which it firmly emphasizes: “Chairman Gonzalo has won a great political, military and moral victory for Maoism, for the Communist Party of Peru, for the people’s war, for the democratic revolution on the uninterrupted march to socialism and communism, for the class, for the Peruvian people and the peoples of the world, for the international communist movement. September 11 will be remembered by all the communists of the world for this great historical significance of universal scope.”

And it also reaffirms: “We are sure that the communists, revolutionaries and peoples of the world will mobilise to highlight this great deed of giving the life of Chairman Gonzalo in a daring and fiery war challenge for the people’s war to culminate it with the seizure of power in the whole country and to move immediately to develop the socialist revolution and through successive cultural revolutions, always with people’s war, to enter with all humanity into the ever golden communism. As he said to his captors, symbolically pointing to his forehead: ‘You are too late, it is already here!'”