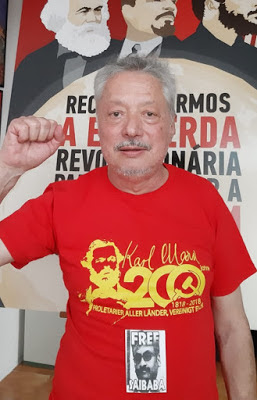 The Editorial Staff of the Communist International / Internacional Comunista newspaper with deep sorrow condolences the comrades of the Construction Committee of the Maoist Communist Party of Galicia, the proletariat in Galicia and the Galician people, as well as the comrades of Dazibao Rojo for the loss of our beloved comrade Martín Naya, which occurred on September 3rd of this year.

Our beloved Comrade Martin Naya was a steadfast fighter for the unity of the International Communist Movement.

Our beloved Comrade Martin Naya was exemplary in the application of criticism and self-criticism.

Our beloved Comrade Martin Naya was a tireless champion of the people’s wars in the world.

We consider that the words of the Galician comrades, on the meaning and final balance of the theoretical and practical activity of our beloved Comrade Martin Naya, are just and correct and therefore we make them our own:

“The Galician proletariat in particular, and the international proletariat in general, lost one of the most important figures of Maoism in the last 40 years, a great connoisseur of the work of Chairman Mao and Chairman Gonzalo, as well as of all the revolutionary movements of the past and present, at international level, he was a true master of the masses and a tireless organizer and militant, he was known as Miguel Alonso to the international proletariat, writing numerous articles on Maoism, making great contributions to the ideological and two-line struggle in the ICM, always forceful and many times polemic, but always with respect to the comrades and open to correct their mistakes, as Chairman Mao taught us”.

Long live the contruction of the Maoist Communist Party of Galicia!