We reproduce the note issued by the National Commission of the Leagues of Poor Peasants on December 9, regarding the death of one of the founders of the LCP of Rondônia, comrade Pelé. 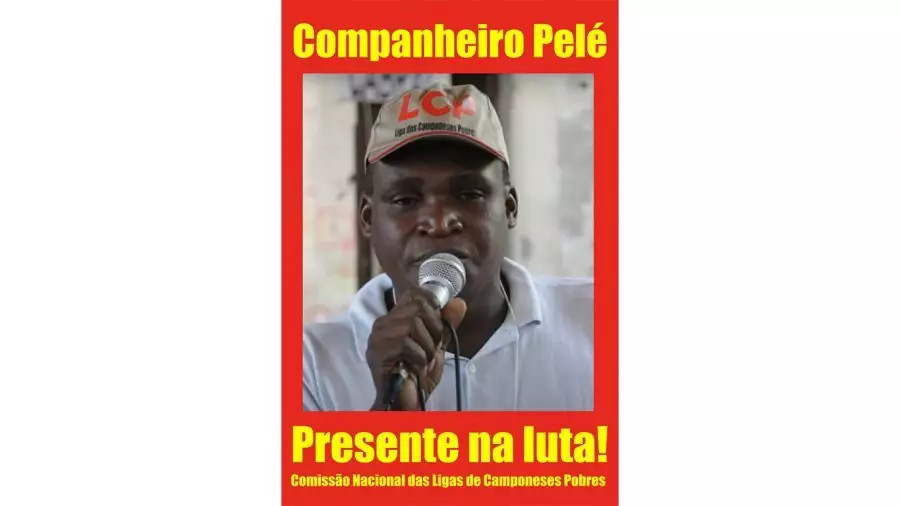 Our comrade Pelé, the peasant born in Bahia, José Fonseca de Araújo, passed away last Wednesday evening, December 8, 2021, at the age of 52. He suffered from diabetes and heart problems. With the support of Popular Relief he had already undergone, some years ago, a surgery that saved him in a critical situation. It was difficult for those who knew him to imagine that he was fighting against so many health adversities. Anytime, anywhere, under any weather, sleeping under a canvas shack or somewhere a little better, where the masses clamored for the League’s support in the centuries-old struggle for land, Pelé was.

Cheerful, optimistic, pointing out a path, holding meetings, drawing slogans, encouraging the discouraged, comforting and welcoming those with more difficulties, Pelé knew how to identify what was a contradiction within the people of a contradiction between the people and their enemies. If at one time or another, out of his good heart, he made a mistake, he never shied away from analyzing the problem with humility. In fact, in our evaluation humility was what this large, loud-spoken, courageous man had in abundance. He always asked that his comrades look into the eyes of the masses while speaking to them.

Pele was not intimidated in any situation. On the countless times when, serving the peasants, he participated in hearings in public bodies, he put in their proper places the “authorities” designated to deceive, soften or intimidate the masses. For this reason, on one occasion, in Pará, the Ombudsman of the landowners Gersino José Filho made a point of identifying him. It was not a joke, it was to warn the landowners, police and gunmen of the danger that that the “Negão” of the LIGA represented for them, together with the masses in that region. And how many regions did Pelé go through in Brazil… Without ever forgetting Rondônia, where he started.

Pelé started young in the struggle for land. According to him, he was active already at the age of 16. He supported the heroic takeover and resistance in Santa Elina, Corumbiara, in 1995. Breaking with opportunism, he participated in the foundation of the Corumbiara Peasant Movement (“Movimento Camponês Corumbiara”, translators note.), MCC. He played an important role in denouncing the deviations of the MCC leadership because, despite the MCC’s elevated understanding of the struggle for land, some leaders still had remnants of the opportunist practices and methods inherited from the previous organisation. In that crucial moment in the history of the Brazilian peasant movement, irrigated by the generous blood of the heroic peasant resistance of Santa Elina, Pelé aligned himself with the need of a radical rupture against all the old. In a fierce, violent struggle, together with the masses, this rupture forcefully opened the space for OUR WAY (“NOSSO CAMINHO”, translators note.), which forged the Leagues of Poor Peasants, which then became organized throughout Brazil. Pelé is the founder of the LCP of Rondônia and Western Amazônia, and for many years he participated in the National Commission of the LCP.

Pelé was persecuted and attacked by “raccoons” (“guaxebas”, translators note.), suffered attacks and was shot at at least twice. Pelé was arrested several times on orders of the latifundia, and then released due to the mass mobilization carried out by the League. Alongside the relentless persecution, opportunism tried to co-opt Pelé with the siren song of electoral farce. With a hard struggle of criticism and self-criticism, the comrade overcame this period and once again swore by the banner of the LCP and the Agrarian Revolution.

And he accepted and carried out tasks in all regions of the country carrying the banner and the word of the League, at the most difficult moment of the struggle between the revolutionary path and the opportunist path in the peasant movement. And wherever he went he won the admiration, respect and affection of the masses. And the hatred of our enemies.

Pelé participated in countless times in the seizing of land, in road closures, congresses, meetings, hearings, etc. He defended the worker-peasant alliance and the Agrarian Revolution. Several times he gave important interviews to A NOVA DEMOCRACIA, a press that he defended tooth and nail. He was an enthusiast of Socorro Popular. He was one of the representatives of the LCP with the rebellious combatant youth in 2013 and 2014, at the height of the mobilisations. He participated in international meetings of lawyers and defenders of the right of the people to struggle for their rights, together with CEBRASPO and ABRAPO. And recently he commanded the retaking of Fazenda Santa Lúcia, a week after the infamous PAU D`ARCO Massacre, in Pará, in 2017.

Pelé leaves us at a very serious moment in which, under brutal repression, OUR WAY shines as the only one for the Brazilian peasant movement. We cannot fail to register our indignation at the way in which his death took place. Pelé was admitted on Tuesday night, and was discharged on Wednesday morning. At the end of the afternoon of Wednesday, the 8th, he was hospitalized again, and a few hours later he died. Could it be that he was in a position to have been released, or was it due to the absolute lacking conditions in the health system they call “public”, which the exploitative scoundrels are only concerned with to make demagoguery in times of pandemic?

To comrade Pelé; to the relatives that he embraced in the last years of his life, his “little big” comrade and the children he adopted as his own, who always respected, admired and supported him in his decision to fight, fight and fight; to his preceptors; to the thousands of masses and comrades who will mourn his departure and pay homage to him, as will thousands of peasant masses in the future: let us continue to raise our red flags of the Agrarian Revolution ever higher; we are going to

continue to strengthen the worker-peasant alliance more and more; we’re going to spread millions of “OUR WAY” booklets to forge fighters who knock like never before on our humble door. We’re going to win, Pele. That victory will also be yours.

National Commission of the Leagues of Poor Peasants, December 9, 2021

Watch the video: I Meeting of the FIPRJ – statement by Pelé, militant of the LCP (League of Poor Peasants of Rondonia).