PKP (Communist Party of Peru) leader Manuel Ruben Abimeal Gusman Reynoso (President Gonzalo) has been held in a solitary cell at the Callao military naval base since his captivity on September 12, 1992, despite his advancing age and deteriorating health. He had a heart attack on 17 July 2021 and was hospitalized. President Gonzalo is the undisputed leader of the theoretical and practical construction of the Peruvian People’s War, which, from the 1980s to the early 1990s, made great hopeful advances in faith and determination in the revolution to the oppressed and exploited peoples and working class of the world. President Gonzalo also promoted Marxism-Leninism.

When he was captured in Lima, the capital of Peru by a CIA-based operation on September 12, 1992, the Peruvian Communist Party had established control over a large part of the country and was making preparations to deal the final blow to Peruvian fascism. When President Gonzalo was captured, he had created a mass-supported movement of about 25,000 guerrillas and thousands of armed militias and millions organized around thousands of illegal mass organizations from all oppressed sections of society. The Peruvian People’s War has been a communist barricade to the counter-revolutionary propaganda of the revolution and the collapse of socialism, carried out by imperialists and all kinds of anti-MLM understandings. The revolutionary struggle under the leadership of the PKP, which made great progress in a short time, He has demonstrated both theoretically and practically that power from the imperialists and reactionaries can only be achieved by drawing clear boundaries with the enemy and the People’s War, guided by Chairman Mao’s teachings. The eyes of the masses.

The struggle and line of the PKP under the leadership of Gonzalo emerged at a time when revolutionary struggles around the world were declining and the revisionist camp was increasingly integrating itself into the capitalist system. At a time when the capitalist travelers, who usurped power in China after Chairman Mao’s death, betrayed the Chinese revolution and dragged China onto a social imperialist route, Chairman Mao’s teachings found their spirit and essence with this exit. In other words, the belief in revolution and socialism has given hope to the oppressed and exploited masses of the world from the Andes with this move.

Therefore, when he was captured by the CIA-based operation, the imperialists and their henchmen wanted to expose him in their own way in front of a large cage to show that they had won. Gonzalo called for the continuation of the People’s War and left the enthusiasm of the bourgeoisie in their crops by saying the International. For 29 years, the imperialists and Peruvian reaction have been taking revenge on the leaders of these struggles and the struggle for revolution and socialism in the person of President Gonzalo, by keeping President Gonzalo under severe isolation conditions. Because, during the People’s War led by President Gonzalo, MLM saw what the oppressed and exploited masses, who were able to create the armed force of the people under the command of ideology and had the right leadership, could do. This anxiety and fear caused the imperialists and their servant Peruvian ruling classes.

Our party TKP/ML carried out serious campaigns in many parts of Turkey and Europe during the period when Comrade Gonzalo was imprisoned and showed solidarity with the Peruvian revolution. Today, he also believes that Gonzalo’s People’s War line is the only way of salvation for the revolutionary struggle of the Peruvian people. In the spirit of internationalism, it supports the Peruvian People’s War under the leadership of the Party.

The Peruvian fascist state must immediately end the inhumane isolation and treatment of President Gonzalo. The international revolutionary and progressive public opinion should raise their voices and increase solidarity for the health and freedom of President Gonzalo, who is kept under severe oppression and isolation conditions and whose life is still in danger.

Let’s embrace the resistance of the revolutionary and communist prisoners held captive by the imperialists and their lackeys around the world in the person of President Gonzalo!

Long live the Victory of the People’s War! 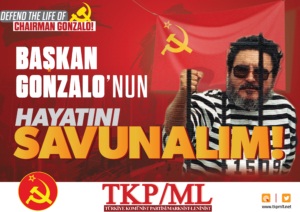