IMMEDIATE RELEASE FOR THE FOUR ACTIVISTS IMPRISONED IN RONDÔNIA

THE POLITICAL PRISONERS OF THE CAMP MANOEL RIBEIRO

The four activists arrested on the 14th of May 2021 are in jail in the city of Vilhena/RO. The accusation against them is that they had allegedly ambushed a road and were “guerrillas” armed with slingshots and rockets. In their eagerness to incriminate the 4 young persons, the Military Police denounced them for attempted murder. However, as the defence lawyers have already stated, this is once again a farce to incriminate those who fight for land: it was the Military Police who cut the fence and invaded a pasture, throwing the pickup truck at the peasants.

With delirious and fanciful arguments, the Military Polices say that the “guerrillas” surrounded the police officers on the road and attempted to take their lives. The “guerrilla” peasants were arrested with a “large” war device presented by the police: 2 handmade slingshots, firecrackers “tied to a rock”, 1 lighter, 2 penknives, some fireworks, 1 pair of nail scissors, some cartridges from hunting rifles, etc. The alleged murder attempt, carried out by the peasants is unfounded, since there are image records and witnesses who saw that it was something armed by the MP itself. The Military Police filmed the operation with drone and car cameras, but when the peasants’ defence requested that such images be shown, the Military Police did not do so. Likewise there is evidence that a gun was put in place during the approach. The Military Police accuse one of the prisoners of shooting, but there is no materiality to these accusations, since in the footage taken by the peasants there is no record of any shot fired. The police is so delirious that their account of the facts says that even a “cavalry” had been organized by the peasants.

The prisoners were taken by the military police to the farm’s headquarters. From there came the sessions of aggression, psychological torture and threats of execution that were not carried out because the operation was filmed by other peasants. This shows how the police act in Rondônia. When they carried out the operation, they tried not to take the prisoners to the police station, but to render accounts to the same great land owner for the “service rendered”. They were already doing it before, when the police were denounced and arrested for pistol-packing for the rancher nicknamed “Toninho Miséria”, according to the denunciation filed by the Public Ministry of Rondônia. The great land owner paid Emerson Pereira Arruda (3rd Sergeant of the Military Police RO), Wagner Ferreira de Souza (Corporal of the Military Police RO), Helson dos Santos Sousa (Corporal of the Military Police RO), Jander Nascimento de Oliveira (Private of the Military Police RO) and other gunmen the sum of R$900.00 a day for each one, as stated in the case file 7004681-62.2020.8.22.0014. According to Military Police RO, there was a “criminal association of military and civil police officers, who were hired to make the ‘illegal and armed security’ of the property”.

The manifesto signed by CEBRASPO and ABRAPO, which brings together signatures from the most varied democratic organisations, intellectuals and public personalities, also demands the immediate release of the four political prisoners: ESTEFANE, LUIS CARLOS, RICARDO PAULINO, and EZEQUIEL. The prisoners are young, with no criminal record and have joined the struggle for land because they believe it to be just and the only way to resolve their survival conditions and those of countless other families. Among these young people, Estefane, a student of Social Sciences at the Federal University of Rondônia (UNIR) in Porto Velho, was unemployed during the pandemic and went to the camp to support the actions of health defence against covid-19 and to work in the education of children and adolescents.

The first hearing of the process will take place next Tuesday, June 29. We call on everyone to show their solidarity with the young activists arrested and demand their release with images, posters, banners in their social networks and public events.

A summary to be shared on the networks can be found in this thread.

MANIFESTO OF MORE THAN 500 DEMOCRATIC ENTITIES AND DEFENDERS OF PEOPLE’S RIGHTS DEFEND THE STRUGGLE FOR LAND IN RONDÔNIA AND DEMAND IMMEDIATE RELEASE OF IMPRISONED ACTIVISTS.

A campaign organized by the Centre for Solidarity with the Peoples (CEBRASPO) brought together more than 500 signatories from Brazil and abroad in defence of the Manoel Ribeiro camp, in Chupinguaia/RO, run by the League of Poor Peasants of Rondônia (LCP) and for the immediate release of activists arrested on the 14th of May 2021. Founded under the slogan “to defend the right of the people to fight for their rights,” CEBRASPO, with its national headquarters in Rio de Janeiro, Brazil, has developed intense work in recent years, consolidating, day by day, its proposal to support those who fight, in Brazil and in the world. Besides defending the right to work, to a dignified wage, to health, education, housing, to the land for those who work it, among other rights, CEBRASPO considers that in a society divided into classes, and in times of deepening of the general crisis of the capitalist mode of production – which increases exploitation and oppression – it is extremely necessary to defend the right of the broad masses to organize, to become politicized, and to wage their struggles in the way they consider adequate and just.

Among the signatories of the Manifesto are the Association of Judges for Democracy, the American Association of Jurists / Rama Brasil, the Brazilian Association for Agrarian Reform, the External General Ombudsman of the Public Defender’s Office of Rondônia, the Pedro Lobo Centre for the Defence of Human Rights, the National Front Against the Privatisation of Health, the National Association of Teachers of Higher Education Institutions – ANDES-Sindicato Nacional, João Tancredo, Dr. Jorge Luiz Souto Maior (jurist and full professor of Brazilian labour law at USP and Judge at the Regional Labour Court of the 15th Region), Peter Pál Pelbart, Cacique Babau, Carlos Latuff, Georgette Fadel, Armando Babaioff, Soraya Ravenle, Olympic medalist Marta de Souza Sobral, Dom Roque Paloschi, President of the Indigenous Missionary Council (CIMI) and Archbishop of Porto Velho; Father Julio Lancellotti; the renowned Indian professor and democrat Amit Bhattacharyya and several honest intellectuals from all over the country.

The Camp Manoel Ribeiro was located on the former Santa Elina farm, the same land where the episode known as the “Corumbiara Massacre” took place in 1995. In a communiqué issued on the 23rd of May, the peasants informed that by unanimous decision of their Popular Assembly they have decided for a planned and organized withdrawal from the area. The 200 families achieved a feat: they withdrew at dawn without being seen by all the police apparatus set up around the camp. According to the statement, they accomplished a “victorious day for the Agrarian Revolution” and with the retreat, the plans to carry out more massacres against the peasants were thwarted.

The signatures on the manifesto are still open, just send an e-mail to cebraspo@gmail.com

The full text of the manifesto and all the signatories can be found at: https://cebraspo.blogspot.com/2021/05/dezenas-de-entidades-democraticas-e.html 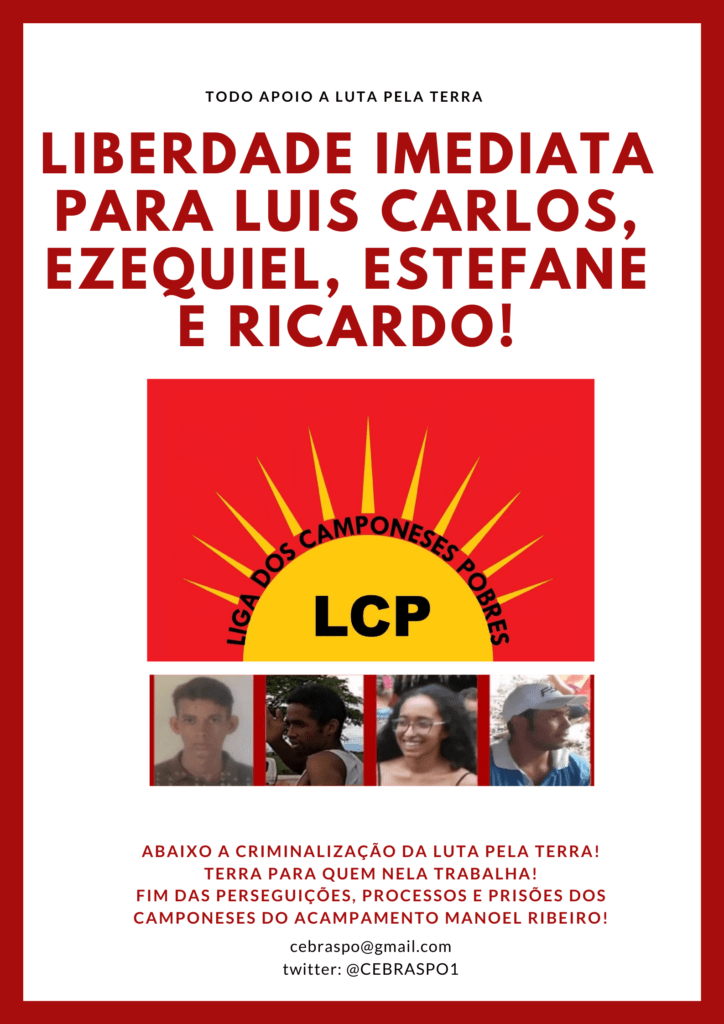 DOWN WITH THE CRIMALISATION OF THE STRUGGLE FOR LAND!

LAND TO THOSE WHO WORK ON IT!

END OF PERSECUTION, TRIALS AND PRISONS OF ACTIVISTS OF THE CAMP MANOEL RIBEIRO!