Support for the LCP is growing throughout the country and abroad.

Editorial staff of A Nova Democracia

The most diverse expressions of solidarity with the Poor Peasants League (LCP) and repudiation of the attacks by Bolsonaro and generals against the peasant movement are growing exponentially. More than 150 progressive and democratic entities and personalities, including renowned artists and intellectuals, have positioned themselves alongside the just struggle for land.

This striking manifestation of support comes at a time when the anti-popular and warlike actions promoted by the genocidal government are forceful, and in their most atrocious form against the LCP and the Camp Manoel Ribeiro.

This number of signatures, which is growing every day, subscribes to the manifesto Enough massacres against the peasant movement! In defence of the lives of the peasants of the Camp Manoel Ribeiro and the League of Poor Peasants of Rondônia, proposed by the Brazilian Centre of Solidarity with the Peoples (Cebraspo) and the Brazilian Association of People’s Lawyers (Abrapo).

“We, the popular movements, men and women, citizens of Brazil and other countries, have come to firmly confront the threats of the Bolsonaro government and the generals to promote one more massacre in the countryside,” the democrats declare. The manifesto also extends to the defence of the freedom of the four peasants who were arrested in the camp, where under the slogans “Struggling is not a crime”, “Land for those who live and work on it” and “Down with the persecution of the peasant movement”, it shows that those who sign it are on the side of the just popular struggle.

The position issued and reaffirmed by the democrats through the manifesto clearly demarcates the line that separates them from the executioners who are looking for a way to massacre the peasants in order to give the necessary support to the latifundia and seek to criminalise the popular movements.

On the other side of the dispute are the words and actions of Bolsonaro who, through recurring speeches, attacked the LCP, as happened on May 7, at the opening of the bridge over the Madeira River, when he said: “LCP, get ready, it won’t be free, cheap, what are you doing? There is no room for terrorist groups here. We have the means to get them on track and respect the law”. (sic)

Bolsonaro was not the only member of the genocidal government to speak out. Among the Armed Forces High Command (ACFA), the spokesperson for the threat to the peasants was Reserve General and Defence Minister Braga Netto, who on 15 May, during a pro-Bolsonaro rally organised by landowners in Brasilia, stated: “Agro is the strength of that country. The armed forces are there to protect you.”

ENOUGH MASSACRES AGAINST THE PEASANT MOVEMENT!

IN DEFENCE OF THE LIFE OF THE PEASANTS OF THE CAMP MANOEL RIBEIRO AND THE LEAGUE OF THE POOR PEASANTS OF RONDÔNIA!

We, the popular movements, men and women, citizens of Brazil and other countries, have come to firmly confront the threats of the Bolsonaro government and the generals to promote one more massacre in the countryside. The recent massacre that took place in the favela Jacarezinho in the city of Rio de Janeiro, where 27 people were executed without their crimes being characterised, their possible trials tried and convicted, in a country where the death penalty does not exist, shows that they are moving to act without respect for laws and international human rights treaties. The password has already been given: Bolsonaro often calls all popular movements that fight for the rights of the people, including the sacred right to land, “terrorists”. And he not only celebrates the advance of the old and new type of latifundia (agribusiness) on protected forests, indigenous reserves and public lands, contrary to the law and persecuting those who want to inspect it.

The camp Manoel Ribeiro of the League of Poor Peasants in the municipality of Chupinguaia in Rondônia is being directly criminalised by Bolsonaro, who set up a war apparatus through the National Security Force, together with the PM of Rondônia, threatening the peasants with high calibre weapons. Currently more than 200 families are camped in the area and an illegal war operation has been mounted against peasants, daily and systematic persecutions with excessive use of tear gas bombs, shooting of rubber bullets and pepper spray, invasion attempts, use of helicopters flying over the camp and continues to surround and isolate the area, preventing families from moving to buy basic subsistence products, a clear attempt to provoke psychological torture, terror and intimidation. They even withdrew the presence of primary health care workers, in the midst of the COVID-19 pandemic, in which vaccination actions are being carried out for at-risk populations. All this attack on the peasants is happening despite the fact that the judge responsible for the recovery process has suspended it, guaranteeing, albeit provisionally, the presence of peasants on the site.

In an escalation of aggressions against the camp, on the 14th of May, the police cowardly assaulted ten peasants, arresting four others, on unfounded and falsified charges with illegal machinations of planting evidence of crimes.

The region is part of the former Santa Elina Hacienda, where the episode known as the “Corumbiara Massacre” took place in 1995, remembered by the peasants as the Heroic Peasant Resistance of Corumbiara, when 12 peasants occupying the farm were killed by police forces, and dozens more were cowardly tortured and beaten, including women and children. This atrocious action took place under the command of Colonel José Hélio Cysneiros Pachá, today Secretary of Public Security of the State of Rondônia, who is in charge of the illegal actions against the peasants occupying the area.

The struggle for land is a legitimate right, and the land must fulfil its social function as foreseen in the Federal Constitution (article 186, CF / 88). It is the peasants who in fact give the constitutional social destination to the property when they occupy and transform unproductive area into productive area. It is the peasants who produce the food that reaches the tables of Brazilians, who today suffer from hunger and pandemics. We cannot close our eyes and turn our backs on the more than two hundred families, including women, children and the elderly, who have tirelessly resisted these illegal actions that constitute real torture and state terrorism.

We join other democrats in Brazil and around the world who have expressed their solidarity with the Poor Peasants League when they say: “Should we let the lie continue? Should we let them accuse the peasants of being terrorists, when armed with hoes, sticks, stones, common hunting weapons they defend themselves from the forces paid by the landowners when they attack them? That they use this as a justification for new massacres?”

In several situations in which Bolsonaro and the Generals faced popular mobilisations, they always tried to disqualify them, accusing activists and organisations of being “terrorists”. Statements that are taking shape in a scenario where the implementation of a true police state against the people is advancing, with the intense criminalisation of poverty and the gradual restriction of the free right to demonstrate and organise. The attack on the camp Manoel Ribeiro and the League of Poor Peasants is an attack on all those who struggle in that country.

We demand the immediate suspension of all actions perpetrated by the security organs of the state of Rondônia and the Brazilian government, including the sending of the National Security Force to the region and the immediate release of the peasants of the camp Manoel Ribeiro arrested on 14 May 2021.

We express our support and solidarity with the peasants of the camp Manoel Ribeiro, the Poor Peasants League and the entire peasant movement fighting for land. We reject the defamations and criminalisation organised by the military police of the state of Rondônia in collusion with the latifundia and its brown press to justify a massacre of the peasants in that state, instilled by the state and federal governments, particularly with the recent declarations of Bolsonaro:

“Our government has had few invasions in the countryside, … Although, let me make it clear, we have a more serious approach than the damage caused by the MST in Rondônia. We have here an example of the LCP, the Poor Peasants League, which has brought terror to the countryside of that state. I met this week with the governor, the minister of justice, to outline a strategy on how to contain this terrorism, which obviously starts in the countryside and can certainly go to the city.”

We call on all democratic and progressive sectors to stand in solidarity with the peasant movement struggling in that state and to denounce this criminal hoax against the League of Poor Peasants (LCP) and the attempted massacre in the camp Manoel Ribeiro. It is urgent that this situation is widely known nationally and internationally to stop this crime that is taking place in the state of Rondônia.

FREEDOM FOR THE POLITICAL PRISONERS OF THE MANOEL RIBEIRO CAMP!

STRUGGLING IS NOT A CRIME!

LAND FOR THOSE WHO LIVE AND WORK ON IT!

To become a signatory send an e-mail to cebraspo@gmail.com 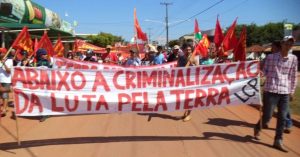