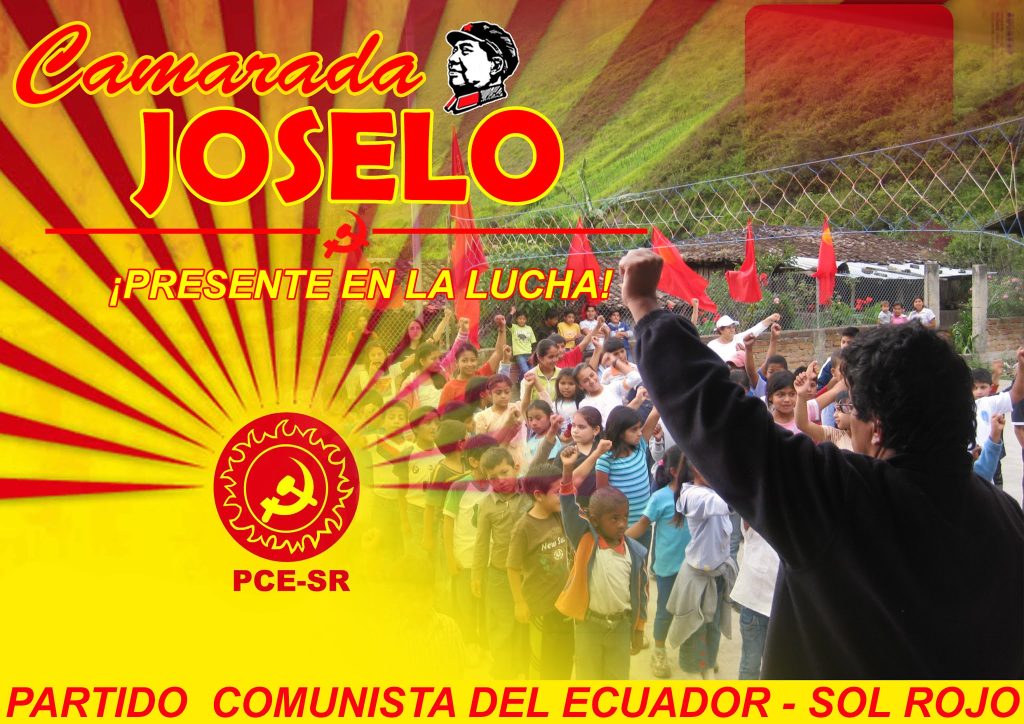 With deep communist feeling we publish today a document of the comrades of the Communist Party of Ecuador (Red Sun) communicating the news of the death of a prominent communist, fighter and as such a commander of the iron legions of the international proletariat. From this humble trench we pay tribute to this brave communist, who lives in us, in the international proletariat and in the peoples of the world. And especially in all those already innumerable red flags that are raised all over the world claiming with a red and defiant combatant cry – It is right to rebel!

Honour and glory to comrade Joselo! 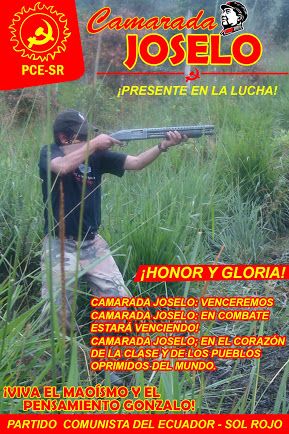 COMRADE JOSELO: IN THE HEARTS AND STRUGGLES OF THE CLASS AND THE OPPRESSED PEOPLES OF THE WORLD!

The Communist Party of Ecuador – Red Sun, with deep sorrow, announces the death of Comrade Joselo, founder and outstanding combatant of the PCE-SR.

Guerrilla, fighter; mass organizer. He was known in the slums of the capital as a formator of detachments of the proletariat; founder of the Committee of Poor Peasants of the North of the country; member of the most advanced military operations detachment of the Party. Loved and respected by the masses in the trade unions, markets, informal vendors, especially by the poor peasantry; hated and persecuted by the reactionaries and other louts of the old state, he gives an account that his life took the right course.

A true builder of the instruments of the revolution. A fundamental pillar in the Party; tireless organizer and articulator of efforts and struggles in the Front; a firm and courageous militant of the germ of the People’s Army where he participated in actions that make the class and the people proud.

Old mole, builder of life knowing that he should also be a destroyer of everything old; dialectic and consequent communist. He was a staunch defender of Marxism-Leninism-Maoism-Gonzalo Thought; especially Gonzalo Thought which he firmly held must be imposed as a higher stage of MLM.

Internationalist. Firm fighter against revisionism and opportunism. Frontal and with an immense capacity and will to face the party tasks. A great loss for the revolution in Ecuador and for the international proletariat.

Despite the fact that the reaction placed him as a strategic target, given the comrade’s sagacity, he could never be identified or hit by the enemy in more than 30 years of uninterrupted struggle to organise the revolution, its instruments and other tasks to overflow with people’s war.

A sudden health condition has given an account of his life, leaving in the heart of the class, the poor peasantry and our people a deep pain, but also a lot of light, conviction and commitment, whose expression will be enlivened in every action of struggle for the conquest of power for the class and the people.

A true commander of the proletarian revolution in the world has died; a man of thought and action, convinced of his principles, has died; in short, a communist whose mettle will be exposed in every drop of blood that we shed; in every battle won, in every combative line that inevitably leads us to the final goal of our struggles: communism.

COMRADE JOSELO: IN COMBAT YOU WILL BE WINNING!

COMRADE JOSELO: WE WILL WIN!

COMRADE JOSELO: IN THE HEART AND STRUGGLE OF THE OPPRESSED CLASS AND PEOPLES OF THE WORLD!

EVERYTHING IS AN ILLUSION EXCEPT POWER!

IF WE DO NOT FIGHT AGAINST REVISIONISM, WE WILL HAVE DONE NOTHING!

TO CONQUER THE RED SUN OF LIBERATION: COMMUNISM!

We solemnly join the comrades of the PCE (SR), the fighters in formation, the activists and masses, the people and the proletariat of Ecuador in singing our hymn.